Deodatt was born to a simple Indian family in South America, Georgetown- Guyana. Respect for Indian Arts and Culture was instilled at an early age and his roots and ties to Music and Culture was noticeable quite early. It was not until his teen years that he decided to pursue his interest and enrolled at the Indian Cultural Centre Georgetown Guyana. It was here that he first leant Tabla from the Tabla expert Guru Pt. Puran Maharaj of the Banaras Gharana and son of the renown Tabla maestro Pt. Kishan Maharaj. This was the opening of a realm which had no turning back for him. A path that was musically enthralling and one which would later shape his future in the field of performing arts 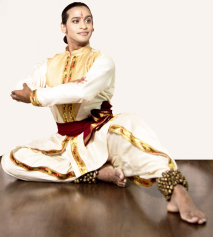 It was Dr. Nalini Mishra who first noticed his eagerness towards the dance. Dr. Nalini Mishra was reputed as a dance instructor from India to the Indian Cultural Centre, Guyana. Its was from her also that he tasted the beats of Bharatnatayam. His interest however, deepened for Kathak under the tutelage of Guru Hemant Panwar also a reputed kathak dance instructor from India sent to Guyana. It was Guru Panwar’s encouragement and Deodatt’s benediction towards the art that allowed him a scholarship grant from the Indian Government under the Indian Council for Cultural Relations ICCR. It was a turning point which ran parallel to completing his academics with the Association of Certified Chartered Accountant (A.C.C.A UK, London ) or opting for the path of Dance.﻿

Deodatt enrolled in the prestigious National Institute of Kathak Dance- Kathak Kendra New Delhi. Here he was taken under the wings of the Jaipur stalwart Guru Pt. Rajendra Gangani and completed his Post Graduate studies there. It was Guru Rajendra Gangani’s training that played a pivotal role in shaping him into the artist he is today. He has worked in many choreographies of his Guru and of other eminent Gurus and has participated in many prestigious festivals of India During his studies of dance in the Kathak Kendra Deodatt also continued in Tabla under the training of Guru Pt. Govind Charaborty and had also learnt a bit of Hindustani Classical vocal.

Today he is sharing his knowledge in Europe and is working towards the propagation and promotion of Kathak in the European sub continent. He is looking to explore the boundaries of this Dance as a solo Kathak artiste and also to work in collaboration with other Dance forms of Europe for experimental work.