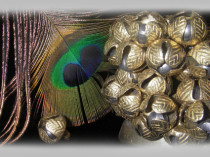 The Sanskrit word kathak or kathika means a narrator or story teller, hence the word kathak seems to have been derived from katha, the art of story telling. Through definite historical proofs one can infer that the kathaks of today belong to this age old tradition of temple musicians. Kathak dance derives its name from the community of kathaks, who are the custodians of the art.

Two major influences shaped the modern day kathak, namely, the Hindu period and the Muslim period. In the Hindu period dance was associated with a number of mythological episodes. These were the days when the dance was offered in the temples for the glorey of the God. In the course of time it developed into a systematic art form, a dynamic medium of self-expression and creation of aesthetic pleasures. The Kathak classical dance was born and nursed in temples; hence today also it has its roots deeply embedded in Hindu mythology.

During the period of Muslim rule in Northern India the classical dance did lose its integrity for some time but did retain its progressive tendency. Here the dance was given a chance to flourish further. It was through the patronage of Nawab Wajid Ali Shah that Kathak flowered into one of the finest dance forms. He contributed immensely to the growth of Kathak as an art form. It was here that the new dimensions were added to the dance and certain aspects such as ‘Tarana’, ‘Salami’ and ‘Ghazal’ were engulfed in the Kathak as we know today.

These two major influences gave rise to two major schools of learning: - namely, the Jaipur Gharana and the Lucknow Gharana.

The origin of the Jaipur Gharana surrounds the Rajasthani Maestro, Bhanuji, a staunch devotee of Lord Shiva. It is said that he learned ‘Tandava’ from a saint and is regarded as the originator of the Jaipur Gharana which made its landmark in dance, an element of mechanical display and rhythmic pyrotechnics. The gharana continues to flourish with many stalwarts to its credit. The list is Chunni lal, Durga Prasad, Shyam lal, Sunder Prasad, Jaillal, Kundan lal Gangani and a host of other brilliant Kathak artistes. Layakari, the intricate time measurement in footwork is the key note of the Jaipur Gharana of Kathak dance. This style was greatly patronized by the Rajas of Rajasthan who not only provided the means of living to the dancers but also encouraged them to perform in the temples rather than the courts. Being Rajputs, They took immense pleasure in watching the executions of patterns within patterns and design within design in the footwork and rhythm. Hence Vir Rasa was the dominant feature of this style with Bhakti being the ultimate goal.

The Lucknow Gharana of Kathak dance came to be known when it flourished under the patronage of Nawabs of Awadh.. When some of the exponents of Kathak were employed by the Nawabs of Awadh as court dancers, then only it achieved public recognition.. Truly speaking the style was greatly encouraged by the Nawb Wajid Ali Shah and since has obtained the nomenclature of Lucknow Gharana. Kathak dance attained its perfection in his court. It did not loose its glamour but continued to progress more and more. It was mainly due to the chief exponent Maharaj Bindadin and his efforts to enliven the art through his future generation (Achhan , Lachchu and Shambhu Maharaj).The Muslim patrons did not encourage virtuosity but wanted to see an art form which mirrored life in all its moods, passion and pleasure. Hence the Lucknow gharana became characterized as a dance which was graceful, lyrical, decorative and sensuous.

It is believed that there are only two major styles The Jaipur and The Lucknow style . However debates are on for the recognition of Benaras Gharana and Raigarh Gharana.

Kathak performance as we see today by various exponents are varied in nature not because the technique differs but this dance form is very individualistic and spontaneous so much depends on the personality, preferences and imagination of the performer rather than the school of dance.